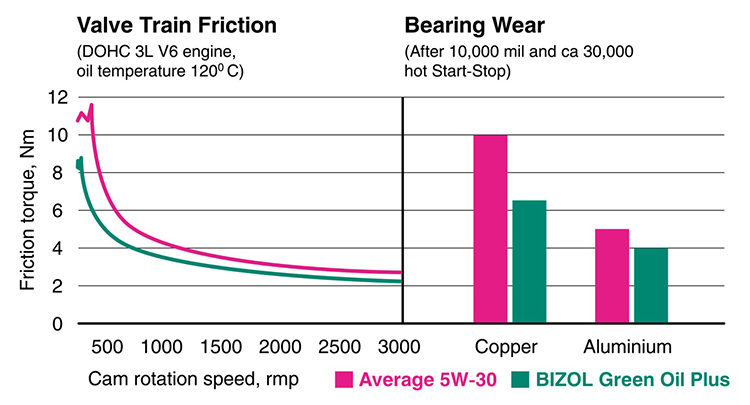 Spurred by stringent emissions reduction targets set by state regulators, the automotive industry has seen an increasing penetration of start-stop IC engines in passenger cars since 2010. Fuel economy gains from this technology are typically in the range of 3 to 12 percent. Hybrid cars also feature start-stop technology. For instance, Toyota implemented start-stop engines in their Prius model already in the late 1990s. According to IHS Automotive, nowadays, two of three cars driven in the European Union and one of ten cars in the United States feature start-stop engines. A leading US automaker reported that 70 percent of its overall fleet will be equipped with automatic start-stop by 2017.

At the same time, the majority of present-day crankcase lubricant specifications are based on test sequences, such as ACEA European Oil Sequences 2012, which overlook the impact of start-stop technology on engine health.

An average passenger car engine is designed to withstand ca 20,000-40,000 starts over its normal service life. While starting the engine corresponds to only an infinitesimal fraction of the engine service life, it accounts for up to 75% of engine wear and wear-related failures! With the start-stop technology, the number of engine starts gets on average a tenfold increase, which is the hardest hit in city traffic. An unfortunate victim of this is the bearings – it is not unusual that the lifetime of bearings in engines with automatic start-stop is halved as compared to equivalent engine configurations without start-stop. The situation is further aggravated by use of ultralow viscosity motor oils which often compromise wear protection for the sake of fuel economy. The most intense wear occurs at camshaft bearings, though balancing shaft bearings, main bearings, and connecting rod/gudgeon pin systems are affected as well. Both oil manufacturers and automotive OEMs are working hard to resolve these problems which are often inherited from the pre-start-stop engine era design. One modern solution to alleviate the detrimental impact of start-stop on bearings is the use of roller bearings both for camshafts and balancing shafts as seen in Jaguar Ingenium engines. Also, the use of electric gear oil pumps helps maintain hydraulic oil pressure in the subsystems after the engine has been switched off.

As a lubricant company, BIZOL has been conducting intense research on the engine tribology and developed new formulation approaches to address the aforesaid challenges from the “oily” side. Our secret weapon is the use of surface-gel-forming superlubricity additives (SLA). This innovative technology – dubbed COMB LubriBoost™ – allows us twofold increase in lubricant film strength and prevents lubricant film collapse even if there is no relative motion between the mating surfaces.